Wegner.tech Microsoft's first cellphone based on the Lumia operating system - Microsoft Lumia 535 is arguably quite successful both through review and sales. At least it looks like this because when we monitored through Lazada's online trading site, this product was sold out.

As if it did not want to lose momentum, Microsoft immediately released the next smart phone that will still be aimed at the middle class with entry-level mobile phones. This phone will be named Microsoft Lumia 435 which turned out to have been anchored at the FCC and also has POSTEL certification. 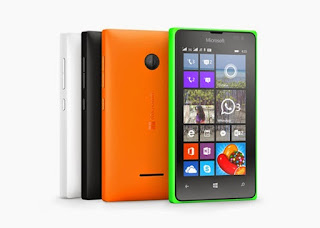 If that's the case then of course Microsoft Lumia 435 will definitely be released soon in Indonesia and only a matter of time.

In software, just like his brother, Microsoft Lumia 435 will also use the Windows Phone 8.1 operating system which is the latest update. While in design, this 435 series does not have many significant differences because the shape of one Lumia with the others is not too much different, elegant and sweet with a typical Windows screen display design called Metro.
The overall size of this smartphone is 118.1 x 64.7 x 11.7 mm with a total weight of 134 grams.

On the front is a 4 inch diagonal touch screen with LCD technology with a resolution of 800 x 480 pixels, with a density of up to 233 ppi.

Turning to the innards, the phone is embedded with Qualcomm Snapdragon 200 chipset, 1.2 GHz dual core CPU ARM Cortex-A7 and GPU Adreno 302. Microsoft Lumia 435 is also equipped with 1 GB of RAM and around 8 GB of internal storage which can still be expanded with microSD up to a maximum capacity of 128 GB.

So far in terms of specifications, the Microsoft Lumia 435 looks very similar to the Nokia Lumia 520 which has already been circulating in the market.

How about photography? There is still a camera, although the camera provided includes a 2 MP main camera and a VGA front camera. It seems the camera sector isn't

The main power supply is provided by a battery capacity of 1560 mAh which according to Microsoft can last up to 21 hours of talk-time, 12 hours of talk-time under 3G networks and 21 days in stand-by mode. But this claim is of course still to be proven.

There has been no official information on what the selling price of the Microsoft Lumia 435, but based on the leaked circulation, this phone reportedly gets an official price tag of $ 70, which means no more than 1 Million Rupiah. If that is true, then the Microfost Lumia 435 is the cheapest Microfost phone to date.

But this is still an estimate only because until now Microsoft does not want to set an official price from Microsoft Lumia 435.