From Our Blog: Specifications Alcatel Pop 10, the Latest Lollipop Tablet

Wegner.tech Maybe you feel unfamiliar and have never known where Alcatel is coming from, a cellphone manufacturer that recently entered the Indonesian market through one of Lazada's well-known e-commerce sites with its Alcatel OneTouch Flash product, which is currently sold out through a pre-order sales program.

Who and where is Alcatel actually from? Alcatel - complete Alcatel-Lucent is a global telecommunications company which is a merger of two large companies Alcatel and Lucent who joined since 2006. Alcatel itself has actually been established since 1898 and had become the company where the Phone Inventor, Alexander Graham Bell worked. 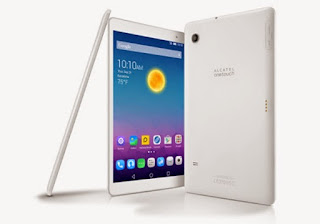 Okay, enough to learn its history. Fast forward to 2015, this time we will discuss the tablets released by Alcatel and named Alcatel Pop 10. As the name implies, the display presented on the front of the tablet is diagonally close to 10 inches - to be exact about 9.6 inches with a resolution of 1280 x 800 pixels the pixel density reaches 157 ppi.

The screen of the tablet made by Alcatel has brought IPS LCD capacitive touchscreen technology with a collection of 16 million colors. The overall dimensions of this tablet are 245.2 x 146.4 x 7.9 mm and its total weight is 380 grams. Big enough and heavy, even for tablet sizes. In comparison, the Samsung Galaxy Tab 3 8 inch weighs 314 grams.

One of the features of the Alcatel Pop 10 is the optional mobile dock with a standard QWERTY keyboard and trackpad that will make it a hybrid netbook.

Alcatel Pop 10 is a tablet phone with call and sms facilities because it has a SIM Card slot, not even just any SIM Card because it supports 4G LTE Cat 4 technology.

Running the Android 5.0.1 Lollipop operating system, the Alcatel Pop 10 uses a Qualcomm MSM8916 Snapdragon 410 chipset with a 1.2 GHz Cortex-A53 Quad-core CPU and graphics processor or GPU Adreno 306. For memory needs, this tablet is equipped with 1GB RAM and internal storage 8 GB can still be added with a microSD card of up to 32 GB.

The photography sector is also not forgotten, Alcatel slipped a 5 MP main camera with a resolution of 2592 х 1944 pixels with geo-tagging features that do not seem to be equipped with LED flash, while the front camera uses a 2 MP lens.

The latter is regarding the power supply source, the battery used by Alcatel Pop 10 is a non-removable Li-Ion 4600 mAh. For the price and when it will be released there is still no certainty from the Alcatel.