From Our Blog: Price of Oppo R1C, Octa-core Sapphire Plated

Wegner.tech Back news from China, this time from manufacturers who have stuck their nails in the domestic market, Oppo for a long time. From the cellphone line coming from the bamboo curtain country, you could say Oppo is the most consistent product release with guaranteed quality even though the price of each Oppo product is also quite high.

This time Oppo released the latest mobile phone called the Oppo R1C with superior features sapphire glass-coated screen. On the back, Oppo is very concerned about the design of this device, which is said to be based on reports from several leaked rumors - this design is able to capture light uniquely - even though it is not so visible from the image. 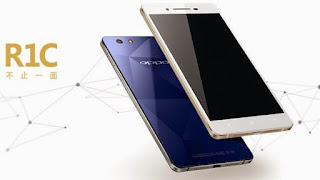 Sapphire glass is so strong and scratch-resistant that exclusive Vertu-class cellphone manufacturers often use it, according to rumors Apple is likely to use the same material for next-generation iPhone devices. Oppo itself is not the only brand from the State of Panda that will use this Sapphire because Huawei had previously used it for the special edition of Sapphire for Ascend P7.

Besides the use of Safir, interesting news from the launch of the Oppo R1C is the use of the Qualcomm Snapdragon 615 chipset. Using this chipset means that the Oppo R1C will use a 64-bit Octa-core processor that will run with a 1.5 GHz clock speed and be accompanied by 2 GB of RAM.

The screen presented at the front of this device has a diagonal of 5 inches which unfortunately only has a resolution of 1280 x 720 pixels, the internal storage provided is also only 16 GB but the microSD slot that is ready to use is able to provide additional storage space up to 128 GB.

The operating system used by the Oppo R1C is Android 4.4.1 which will be wrapped in the Oppo Color OS 2.0.1 user interface, while the battery used to provide power for this device has a capacity of 2420 mAh.

To satisfy photography enthusiasts, Oppo embeds a 13 MP main camera with a Sony Exmor R IMX214 sensor with f / 2.0 aperture for the best picture in low light conditions. In addition to the rear camera, selfie cameras or front camera with 5 MP lenses are also provided.

Finally, the Oppo R1C supports 4G network access and has two card slots that you can use. The price pinned by Oppo is $ 400 or about 5 million rupiah and will begin to be released on January 20, 2015.