From Our Blog: Bitcoin Billionaire, a Bitcoin Mining Game

The Bitcoin Billionare game is definitely not a shiny Final Fantasy with stunning 3D graphics. No grenades exploded with the effect of a huge explosion. There is no sad blue-hearted story that makes us cry. There is no.

Then what is offered? This game produced by Noodlecake uses a game formula similar to that offered by Kairosoft. Namely a managerial game using a pixelated cartoon style that remains eye-catching 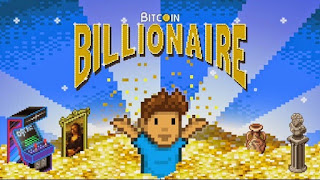 First you have to understand how to play Bitcoin Billionaire. One way, you have to tap the screen. That is all. Tap the screen as much as possible. Every time you tap you will get Bitcoin (not the original Bitcoin of course) and the amount of Bitcoin you get will depend on how strong you 'mine'.

You can stay with two fingers, three fingers or even five fingers to get as much Bitcoin as possible. Bitcoin can later be exchanged for upgrades for mining purposes and other things that can improve your pad capabilities.

There are also drones from Amazon that will deliver interesting items randomly and various other events to keep this game interesting. If you have ever played the Cookie Clicker game, this game will feel similar.

You will climb the ladder of success starting from nothing - a small office, a squeaky old desk, and a very slow computer. With Bitcoin you will collect your money and wealth, until in the end you can change the design of your restroom. You can turn an old bookcase into an entertainment center or full of high-value works of art.

This game includes a free-to-play game, with In-App-Purchase for a special currency called Hyperbits. The fun is you can get these Hyperbits when playing and there are no special needs that require you to spend money lavishly. Bitcoin Billionaire intelligently also offers you an added bonus if you want to receive banner ads for a few moments or watch a short video ad.

Until now this game has been downloaded by 500 thousand enthusiasts, of which 20 thousand have given a rating which until now has remained at 4.5 stars.